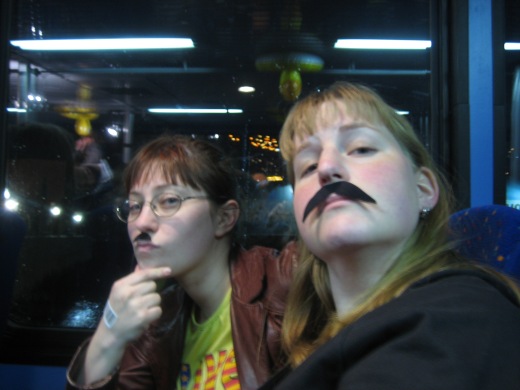 Who are Liz and Laura? Well, we’re glad you asked.

Liz and Laura are two foxy writers whose collective coolness is recognized by literally tens of readers.

They met in their hometown of Tucson, Arizona, in the sixth grade. Back then, life was simpler, life was good, albeit sober, and little did Liz and Laura know of the dazzling future that lay ahead. It all began when Laura spotted Liz from across the noisy cafeteria, attempting in vain to argue down the price of an ice cream sandwich. Liz’s taste in sweets, combined with her overwhelming frugality, struck a chord in Laura, and life was never the same. Liz was a tap-dancer, a Karate black belt, and an all-around girl about town. While all of this, as I’m sure you can imagine, was incredibly fulfilling, she decided to share with those less fortunate and take on an apprentice. Liz found that Laura just needed a nudge in the cool direction, and decided to take her under her wing and teach her the ways of the streets.They found that if they combined their powers of comedy and coolness, their quick wits and staggering beauty, they would be virtually unstoppable.

I’m sure you can imagine the friendship montage that took place.

As Liz and Laura blossomed from naïve tweens to comely young ladies, their friendship was solidified through a shared love of comedy writing, and a healthy diet of tomfoolery and mischief, high school style. Between the endless parties, occasional bouts of studying, and summers on Cape Cod, childhood was soon but a faraway memory. Upon graduation, Liz found herself staying in T-Town, while little Laura headed for the artsy-fartsy halls of NYU in New York City. Back home, Liz’s popularity continued to skyrocket, as she perfected her hilarity, street cred, and binge drinking skills. But, in the end, this proved to be not enough for Liz’s big city dreams, and she found herself joining Laura, in a tear- (and beer-) soaked reunion.

Nowadays, Liz passes her time in fabulous Brooklyn, which was the birthing ground for the “Liz and Laura” empire that the world has come to know and love, while Laura has returned to her beloved Tucson. But while they may be a continent apart, their friendship and devotion to “quality” writing remain strong! So please, join them as they recount our adventures past, deconstruct the trappings of the present, and build a cooler future for you and me.

Oh, and if you like Liz and Laura enough to wear their likenesses around town, which you should, check out this merchandise shop at Zazzle.