This isn’t new, but it sure is awesome. A television news team was commenting on Lionel Richie taking a hit of helium before singing, and, well, monkey see monkey do. The Huffington Post did a great writeup about it, and the video is included for your viewing convenience.

So in an ill-conceived promotion for the new Pixar movie Up!, Sherri Shepherd of The View was made to look like she was lifted out of the studio by a large bunch of balloons. She then goes on to put on the funniest bad performance I think I’ve ever seen from her. She clearly has no interest in making the gag at all convincing. The whole thing reminded me of Virgania Horsen more than anything else. God I wish I had a clip. I’ll add one as soon as it’s available! But trust me, it was weird.

I guess American Idol is over now…so many memories of Ford commercials, now just dust in the wind. Anyway, if you haven’t heard, the winner is Kris Allen! I voted for him, just because I was getting tired of Adam’s schtick. I do hope that Adam has a long and glittery career, but Kris had to play the piano and guitar and stuff while he was singing…that’s double the work!

On another note, what the hell was Kara DeLaGuardia (De La Vega?) or whatever smoking tonight? She stripped, for god’s sake! And is it true she wrote that atrocious song which we’ve now had to listen to three times? She sucks ass.

Who did you vote for? 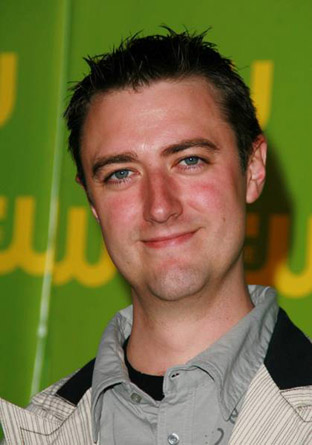 I like the fact that Sean Gunn, brother of Troma alum and director extraordinaire James Gunn (and onetime brother-in-law of The Office‘s Jenna Fischer), is in the new KGB information service commercials. He was cool in Gilmore Girls and I met him once, so that must be worth something.

Here’s one of the ads now…

Here’s the only list that counts, Liz and Laura’s top 10 most popular articles!

3. In honor of Mr. Blackwell, a Worst Dressed List

4. L Word fans — is Niki supposed to be Lindsay Lohan?

6. The 10 Most Irritating Celebrities

8. The 2007 Celebrity Superlatives – The Best, Worst, and Freakiest

I watched the final performances tonight, and my only thoughts are: a) I’m glad that somebody sang a Sam Cooke song, and b) the episode was too short. Comment below if you care…but in my opinion, Adam’s novelty has worn off a bit.

American television has its highs (Dexter, Weeds) and its lows (The Biggest Loser, Howie Do It), and I love every minute of it. Still, as rich and diverse a television landscape as we have in this country, there are some equally amazing shows being made around the world. Strange but true. Here are five of my favorite currently airing foreign shows.

4. Brain Wall (Japan) – The original is far superior to the US adaptation, “Hole in the Wall.”

2. Summer Heights High (Australia) – Sort of like if Christopher Guest made a series and played all the major characters.