A note: There are plenty of awesome comedians that aren’t on this list, like Andy Kaufman, Bill Hicks, and Lenny Bruce, but I have to be honest and put down the ones whose records I actually listen to often. Cheers!

9. Wanda Sykes (hilarious, and a pothead) 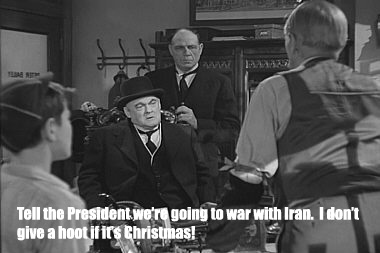 So it’s no secret that now-Former Vice President Dick Cheney made quite the entrance at last week’s inauguration, riding in on a sinister wheelchair quite unexpectedly. And if you recall, in late 2007 I pointed out some of the stunning similarities between Cheney and one Mr. Potter from the much-beloved Christmas classic “It’s a Wonderful Life.”

I would also like to take the opportunity to point out that I’m not the only one who noticed the stunning resemblance between these two gentlemen. In fact, I received an usually high (more than two) number of hits on the original Cheney-Potter article immediately following the election, and after some expert-level sleuthing on ye olde Analytics, it became clear that the search term “Cheney Mr. Potter” was responsible for this burst. Check it out, I’m #4 for that shit on Google! And then it got stranger. While checking out this Google situation, I stumbled upon this U.S. News & World Report article from the day after the election. Here’s the relevant quote:

“And then at a Brookings Institution event this morning, former Bush (43) speechwriter Michael Gerson, trying to warm his audience, said he was surprised how much Cheney now looks like Mr. Potter, the villain from It’s a Wonderful Life.”

Why oh why didn’t they link to my article instead of that goofy picture? Anyway, I reckon some intern whose job it is to comb the internet for Bush administration references stumbled across my site, thought it was the best thing he’d ever seen, and spread the word around the White House. Shut up, that’s the way it goes in my head. 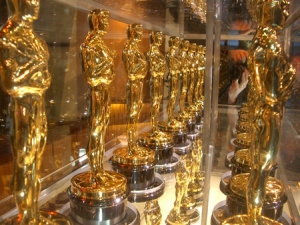 Before somebody points it out, I know the above photo is of Oscar statuettes. I just don’t have the time to waste on photo editing when there’s so much Hollywood feces to scoop out of the giant TV litter box that is my brain.

-I don’t like the whole cutting straight to the Best Supporting Actress award thing. What happened to showmanship? I want a little song and dance before getting down to business. Plus, the poor losers have to spend the rest of the show pissed off. P.S. Jennifer Lopez looked stupid.

–Alec Baldwin made a quick but obvious attempt to patch things up with his daughter Ireland during his speech. He should’ve finished it “…you spoiled fat pig.”

–Heath Ledger’s corpse got a Golden Globe. I’m sure that makes him feel better. They should have reanimated him so he could give an acceptance speech from beyond the grave. Now he’s a lock for the posthumous Kids Choice Award!

–Sean Penn and Milk snubbed! I guess important issue-oriented films have gone out of fashion, in favor of Bollywood and wrestling pictures. Wrestling pictures, for god’s sake!

–Renée Zellweger looked like poop on a platter. The hair, the dress, even her dazed demeanor. No, no, and no.

–Tina Fey wore quite the cleavage-filled outfit. And she won, which is pretty cool. Her character on 30 Rock is pretty damn hilarious, even if her name is that of my nemesis.

-Dammit! Dexter got Dissed! It’s my favorite show, and Michael C. Hall deserves an award simply for being so attractive. Gabriel Byrne indeed.

–Slumdog Millionaire made quite the showing, picking up all the major Drama awards. Nice! Danny Boyle deserves the recognition.

–Seth Rogan has slimmed down. I don’t know that it suits him.

-The poor schmucks who made Kung Fu Panda didn’t actually think they had a chance against Wall-E, did they? I wonder why some of these people even bother showing up. Oh yeah, there’s free booze. Well never mind!

-Can we please ditch the Best Original Song category? It sucks ass. At least I predicted it accurately, because I utilized the Bruce-and-Bob rule: whenever Bruce Springsteen or Bob Dylan is up for one of these crap song awards, they always win. I don’t know if that’s actually true, but it sounds right.

Well that’s that. There’s a complete list of winners here, if you’re curious for some godforsaken reason.

I hate shit like CSI as a rule, but I thought of a variation on the format that I think would work. I would watch it, anyway.

The title would be “CSI: Vampire Edition.” You see, every week there would be a mysterious murder, and the CSI unit would put all their technical expertise, close-up shots and all, to work solving the crime. And every week, the killer would turn out to be Dracula.

And also, for a twist, one of the CSI lab fools could turn out to be a vampire too, in a cliffhanger bridging a season break. They’d notice because he was always working the night shift, licking his lips when investigating blood stains, and turning into a bat.

CBS, I await your contract offers.

Here are some patterns I’ve noticed from watching entirely too much television and cinema:

-Everyone orders drinks at bars and then doesn’t drink them. This is more true of crappy movies, ones where the screenwriter and/or the director doesn’t have a concept of timing actions in scenes, but other than lighting a cigarette and then immediately putting it out, few things irk me more. Even if it’s only stage liquor, dammit, I hate to see a drink go to waste.

-Nobody ever cries when they get injured. Usually when you see a grown man or woman do something as simple as twist their ankle on a cobblestone street, their instinctual response is to burst into tears. In movies, folks be getting shot and stabbed and such, and they barely flinch. The only exception I can think of is Bruce Willis–I recall that his tears of pain in “Die Hard” are what made Terry Gilliam cast him for “12 Monkeys.” Terry knows what’s up.

-Nobody ever takes anybody’s contact info, but they all seem to know how and where to find each other. Especially in a city like New York, that makes little to no sense. If I lost my phone, my friends would be as good as dead to me.

-When there’s a crazy car chase going on, with two or three maniac cars smashing their way through a highway pursuing each other, jumping on the hoods and all that, why do the other, non-involved cars keep driving? I’d pull over.

-Whenever there’s a disaster, they show people gathering around TVs in public places all over the city as soon as the news update hits. Come on, really? When’s the last time you saw a TV that was tuned to the news at all? The businesses in my neighborhood mostly stick to Telenovelas. It would be weeks before I knew there was a war if I relied on that shit.

-Speaking of war, when they show young soldiers going off to fight, they’re always getting on a bus of some kind. Last time I checked, soldiers these days use the damn airport. Where is this war, Milwaukee? Maybe it’s just the airplane shuttle they’re waiting for.

In conclusion, get it together, Hollywood! TV and movies are confusing enough for stoners without having to make sense of illogical claptrap like this.