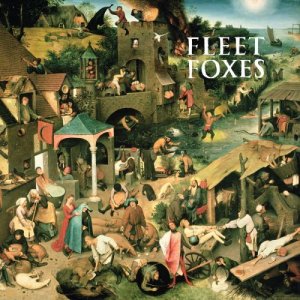 When considered without any contextual information, it’s difficult to group Fleet Foxes immediately within the tumultuous Seattle music scene from which they’ve emerged. With their long beards, country guitar sound, and tale-telling lyrics, one imagines rather that their self-titled debut is the result of its members spending several months strumming strings ‘round a camp fire. This summer camp feel is guided by the sagelike Robin Pecknold, who brings wisdom to the lyrics and provides a striking point of focus to the vocally-dominated album. The group’s sound is infused with a vibrancy that seems inspired more by the openness and inherent creativity of nature than the stifling conformity of a major world city. As the songs consider folkloric themes while moving with this honesty and freedom suggestive of the vast expanse of the open countryside, they remain grounded in the roots of pop music to bring on some downright rockin’ moments.

That is not to say, however, that Seattle isn’t an inspiring city filled with creative minds and enriched by a long history — Fleet Foxes have taken their unique set of personal stories birthed in this town and added to them an awesome bit of old-timeyness that makes the band seem wise enough to be worth listening to. This is highly appropriate, because frontman Pecknold lists as early influences some of the many staples of 60’s rock, such as The Beach Boys and Crosby, Stills & Nash. These boys have paired their musical upbringings — some apparently soaked in the classic structures of early pop — with a healthy curiosity inspired by the era from which they actually come. With their strong ear for catchy melodies, careful crafting of many individual parts, and astounding obsession with the power of harmony, the songs on Fleet Foxes perform the simple task of pleasing the ear while still taking plenty of creative adventures.

And adventure is indeed an appropriate term. Fleet Foxes meticulously blend a sometimes alarming number of instrumental and vocal parts to create songs that sound rewardingly rich and full. This description can be applied to their melodies as well, which while individually catchy and reflective of fine compositional talent, are constantly being prodded and reworked to see just how far they can be taken. In this baroque fashion the focal points of the songs shift and move around so that while one may find themselves tapping their toe, that does not necessarily mean they’ve understood the main arc of the song, for even the jumpiest moments can soon give way to a watery refrain or a moment of quiet vocal reflection. Pecknold’s self-confessed interest in harmony is easily detectable throughout the album, and is masterfully explored in a variety of ways that go beyond regular rock band accompaniment. Every member of the group, it seems, is required to contribute some vocal talent, an idea exemplified by such moments as the radio variety program album opener on “Sun it Rises” and the intensely angelic choral tinkerings of “White Winter Hymnal.”

It would be easy to bunch Fleet Foxes with the Southern rock genre because of their throwback themes, porch collective big sound, and the voice of Pecknold that at times recalls Band of Horses’ Ben Bridwell. While not entirely inappropriate, this categorization won’t do simply because Fleet Foxes’ tendencies go beyond the fundamentals of Southern rock. Sure there can be heard a lot of guitar plucking and eager banjo playing in these tracks, but the group’s curiosity with vocal and melodic structure takes them to new places comparable to modern bands like Grizzly Bear. While certainly refreshing and admirable, a reminder that this is in fact their first full-length album comes in the disc’s second half when the songs begin to sound soupy and blend together a bit, as if this experiment forgot the structure of a satisfying, complete album and wandered too far into the woods. Fleet Foxes never stops pleasing the ear, but loses some of its initial grabbing power as the tracks become muddled and the individual song ideas less developed. Saving the experience is the lovely closing track “Oliver James” that finds Pecknold alone with just his boys-choir warble, a lonely guitar and a bit of rhythm. It seems to bring the campfire session to a late night close, its haunting echo reminding listeners of Fleet Foxes’ simple beauty and profound ability to tell a tale of old.